So I'm driving through Silver Spring, as you do; and I pass a street sign that makes me smile, as you also do; and that should be the end of it, right? Only NO. Now it has to be a FIC.

Damn street signs. Honestly, I'm just jealous because I've never found one with my name on it.

Oh yeah, also: not my characters, not my car, not my street sign (though not to say I haven't thought about it), and also, I blame Silver Spring. 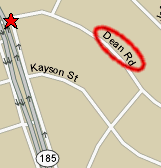 "Dude, what the hell are you doing?"

"Did you see that?" Dean didn't look at Sam; he was craning his neck out the window, then swerving a sloppy U-turn into oncoming traffic, narrowly missing the fender of a cherry red SUV. Sam gripped the dashboard and reminded himself that Dean's driving still hadn't gotten him killed. Yet.

If they'd survived everything else so far just to end up as spare parts strewn across Connecticut Avenue, he was going to kick Dean's ass all the way down to hell.

"See what?" he asked finally, when death proved to be less than imminent, and his brother failed to elaborate. "It's the middle of the day, Dean. Phantom hitchhikers only come out after dark." After two days in suburban Maryland, they'd figured out the figure haunting the two-mile stretch of Aspen Hill definitely wasn't a Woman in White, which was good, Dean said, because he was sick of sequels. Unfortunately, that was all they'd figured out so far. Two nights and they hadn't seen the hitchhiker once yet; a new record, Dean claimed, for boredom in action. Sam just kept his mouth shut and made sure he had plenty of batteries for his book light.

Dean, of course, mocked him mercilessly for it, and didn't seem inclined to let up anytime soon; he tsked, the prim sound turning almost lewd in his mouth. Dean couldn't do prim if he tried. "All work and no play, Sammy. Have you learned nothing from the classics?"

Sam sighed and began, "So, what," and then he saw the sign. "No. Oh no. Please, please tell me you're not doing what I think you're doing."

"You really have no sense of adventure, do you?" Dean smacked Sam's hand away as he grabbed for the steering wheel, harder than he really thought necessary. "Hey! Hands off the equipment, bitch."

"Dean," Sam said slowly, rubbing his stinging knuckles. A lot harder. "We've hunted wendigos and pissed-off ghosts. We performed an exorcism on a damn airplane. I've spent the last eight months living with you in a car."

Dean eased into the left-turn lane and shot Sam a quick sideways frown. "So what's your point?"

"You think I have no sense of adventure because I don't want to help you steal a street sign?"

Your job. Dean talked about hunting like it was a career, like he was insulted nobody paid him for it. Sometimes Sam liked that about him. Sometimes it made him really, really miss school.

"It's a street sign," he said again, in case it hadn't sunk in the first time.

Sam sighed and slumped back in his seat, conceding temporary defeat. They turned onto Dean Road and pulled over beside the curb, and he asked wearily, "You know you can buy those, right?"

"No sense of adventure," Dean said sadly. "You worry me, Sam."

"I worry you?" Dean opened the door, and Sam leaned over and grabbed his arm, making a last-ditch effort. "Do you know how many cop cars we passed back there?"

"Two or three," Dean allowed, prying Sam's fingers off, one by one. "Must be-- damn it, Sam, would you let go already? Must be an accident or something."

"With no lights flashing? Dean, we're what, five miles north of D.C.?"

Sam held on. "This isn't the boonies, Dean. We're a stone's throw from our nation's capital, it's rush hour for God's sake, and there were four of them, you blind ass!"

"And the longer we sit here," Dean snapped, "the more likely we'll see a fifth." He gave up on force and twisted his wrist around, grabbing Sam's forearm with both hands. "Indian burn, Sam. Don't make me hurt you."

Sam raised his hands in surrender and sat back. "If you get arrested, I'm not bailing you out."

"Sure you are," Dean said with another bright smile. "You're my brother, you got my back."

"I mean it. I will leave your ass hanging, man."

"Well then. Thanks for the warning," Dean said, and reached for the car keys, slipping them into his pocket before Sam could grab them.

"Like that's gonna stop me!" Sam yelled out the door after him. Like Dean wasn't the one who'd taught him to hotwire a car in the first place.

Dean raised his middle finger over his shoulder without looking back.

Sam groaned and covered his face. "He's an idiot," he said under his breath.

The Impala's engine ticked as it cooled, and it sounded like assent.

He wasn't going to watch, but curiosity got the better of him, and he turned just in time to see Dean shimmying up the signpost at the corner, knife clenched between his teeth. The traffic on Connecticut Avenue slowed to a crawl, and somebody leaned on their horn.

Sam leaned over again and shouted, "There's another sign on the next block, you know!" Further away from the main road and the police patrols, where half of Montgomery County wouldn't see him committing acts of vandalism in broad daylight. Dean either didn't hear him or chose to ignore the suggestion.

"Idiot," Sam confirmed, and turned back around, staring grimly down Dean Road and counting down the seconds. Ten, nine, eight....

He'd just reached three when the siren started, and was already in the driver's seat when the door flew open and Dean panted, "Dude, shove over, we gotta book."

"I told you," Sam said, feeling for the wires under the steering column with one hand and snapping open his pocketknife with the other. "I'm outta here."

"Very funny, Sam." Dean glanced over his shoulder, then punched Sam's bicep. "Are you deaf? Move!"

"Hey, I didn't do anything illegal."

"You're stealing my fucking car!" Dean exploded, and punched him again. Sam laughed despite the pain, and moved the knife away as Dean grabbed for it, holding it just out of reach. "I swear to God, Sammy, you cut a single fucking wire--" Blue lights flashed in the rearview mirror, and he froze. "Shit, shit, shit. Okay, you were right, you proved your point, can we please go now?"

Sam kept one eye on the mirror, judging the police car's approach, and relented at the last possible second. "Fine. Give me the keys."

The police car started to slow.

"Fucker," Dean grumbled, and threw the keys at Sam's head. Sam caught them one-handed and started the car as Dean flung himself into the backseat, all flailing limbs and injured sulk. Behind them, the cop stepped out of his car and slammed the door. "Go, go, go--"

He kept going until the lights faded from view, elbowing Dean whenever he leaned into the front seat to urge him on, then pulled onto the eastbound Beltway back to the Georgia Avenue exit and their motel room, and settled in the right lane at a leisurely 65 miles per hour. A quick glance in the rearview mirror showed Dean slumped down in the seat, arms folded across his chest, glaring daggers at the back of Sam's head.

Dean held up the sign without a word. Dean Road. Sam sighed.

"What the hell do you plan to do with it, anyway?"

After a moment, Dean said, "Didn't really think about it."

Figured. "Well," Sam allowed, "at least one good thing came out of this."

"Yeah, it did," Dean drawled. "I learned my little brother's an asshole, and I got me a sign."

"You also admitted I was right."

"'You were right, you proved your point,'" Sam mimicked.

Dean threw a wadded-up map at the back of his head, and he ducked and swerved into the next lane, protesting, "Hey, driving here!"

"Dude, my voice is not that high-pitched."

"You are so immature," Dean said with dignity.

"I should've left you there," Sam grumbled.

"I'm telling you, man. No sense of adventure."

Sam sighed again. "Some days, it's just not worth letting you off your leash."

"I heard you the first time, jackass."

Dean patted him on the shoulder. "Don't worry, Sam, we'll get you one too."

"For my sins," Sam muttered, and kept driving.